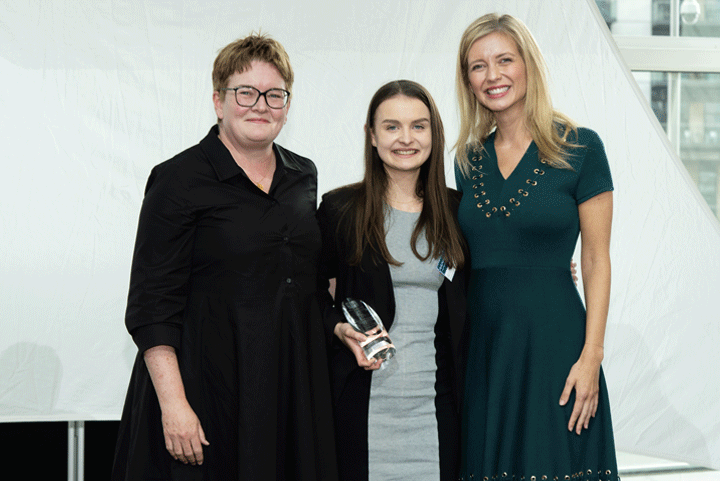 Daisy studied international business management at the University of Bristol. She has completed a broad range of work placements including a summer internship for a technology start-up specialising in corporate social responsibility and in the office of the shadow secretary of state for health. She also completed a finance internship at Centrica. In her own time, she has pursued her interest in technology by learning to code, worked as a fundraiser for Guide Dogs and was selected as a peer mentor and university course ambassador. 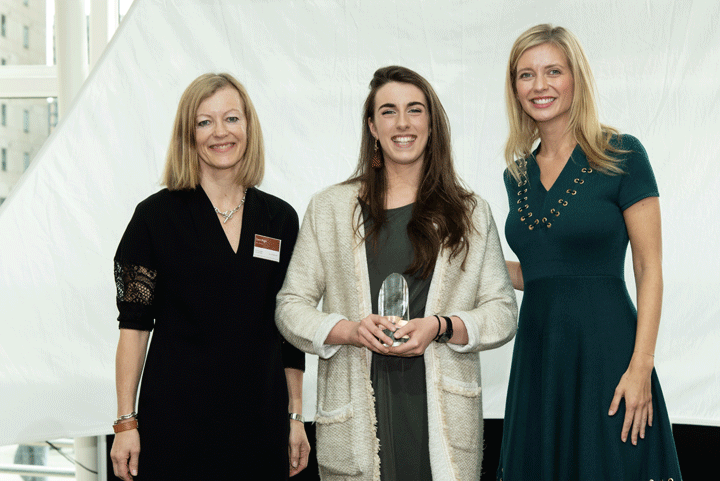 Carmen studied materials engineering at Imperial College London. She is half Spanish, half Portuguese, but was born in Luxembourg, and speaks four languages. During her undergraduate experience, Carmen took every opportunity to learn outside the scope of her degree, from becoming the president of the Catholic Society at Imperial to reaching the semi-finals of a female-led start-up competition. She is passionate about combining STEM skills with the legal world and aims to become a ’lawyer of the future’. During her degree, she enjoyed working on projects within various industries, such as oil and gas, medical devices and consumer goods. Since the awards, Carmen spent time with Allen & Overy working at FUSE, its tech innovation hub. 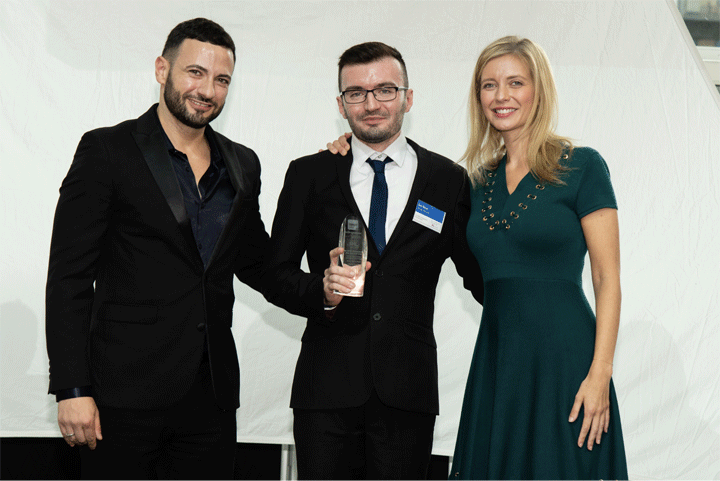 Tom studied management and information technology at Lancaster University. He was the founder of Lancaster’s first Sign Language Society, the disability representative for LGBT and the lead for Students with Learning Differences. Outside of university, he undertook an IT placement with BAE Systems (promoting its disability and LGBTQ+ employee networks), represented the Management School in Boston (ensuring its smart city remains inclusive) and constructed the first signed version of a UK Eurovision entry’s song (alongside the BBC and YouTube). He is a committed leader for diversity and inclusion. Tom is a future trainee solicitor with Clifford Chance and has travelled to both Brussels and Hong Kong to experience the different practice areas at the law firm. 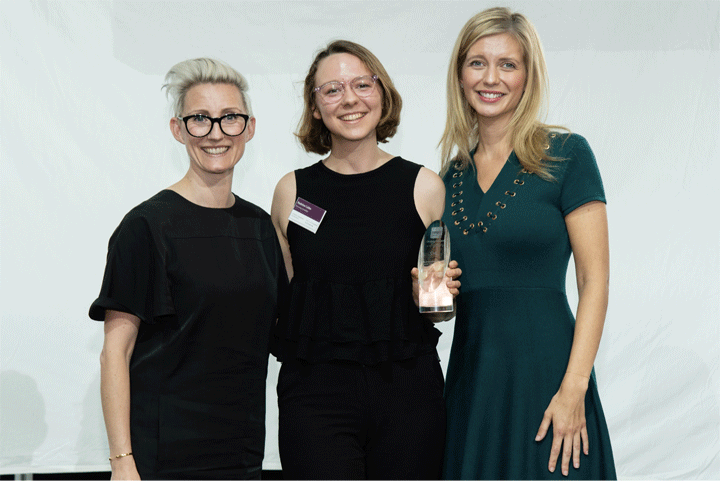 Maddie studied chemistry at the University of Sheffield. Having been accepted onto the Lloyds Scholars scheme in 2016, she completed two summer internships in Bristol and London. Maddie greatly enjoys problem solving and in 2018 was placed as runner-up in the innovation category of the Telegraph STEM Awards for her work designing a wearable device for mental health conditions. Alongside her degree, Maddie has chaired the student welfare committee and been a student residence activity representative. In her free time Maddie participates in adventure sports, particularly rock climbing, and recently obtained a qualification in outdoor first aid. After winning the award, Maddie spent a week with Clifford Chance on its SPARK scheme and travelled to its Brussels office. 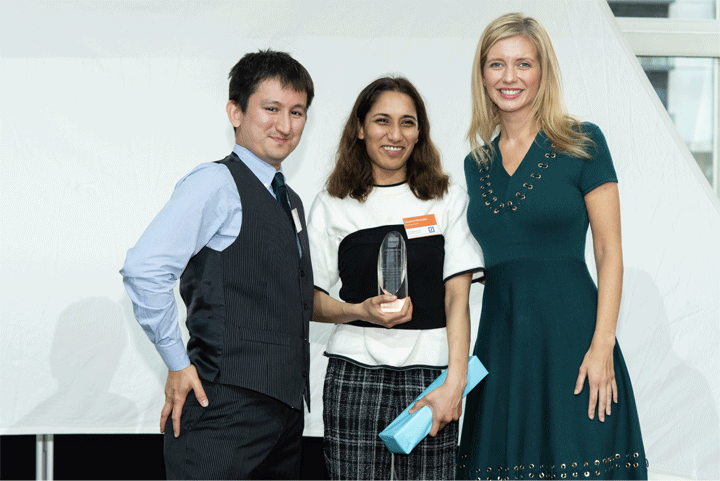 Chevonne is studying physics at the University of Leeds. Aside from exploring the depths of space, she likes to paint, draw and create interior craftwork. In her spare time she sings in a band and plays the violin, guitar and piano. Chevonne has been lucky enough to volunteer at King’s College Hospital as well as work alongside healthcare professionals in a psychiatric and intensive care unit. She is learning Spanish and is ever excited by the opportunities that university life allows, such as kayaking on the River Leam, taking part in salsa classes and archery. 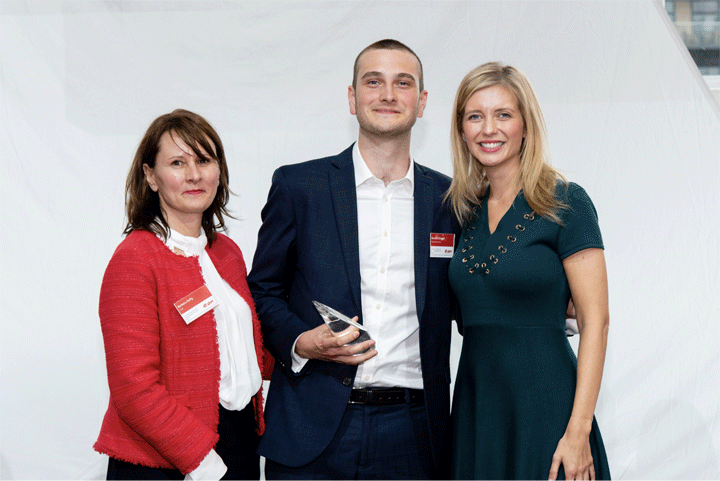 Benedek is a mechanical engineering student at the University of Leeds, achieving the Dean of Engineering Excellence scholarship. He also has a keen love for music and nature, co-hosting a university radio show, LS Soul, and volunteering at a variety of festivals including Bluedot Festival, a science and music festival at Jodrell Bank. Benedek is passionate about reducing society’s current impact on the environment through changing energy infrastructure and spreading ecologically sustainable values. At his home in Cheshire, Benedek is also involved with Beech Hill Permaculture, a sibling-led small-scale community project working to apply and live out these values. After the awards, he completed a placement year with E.ON. 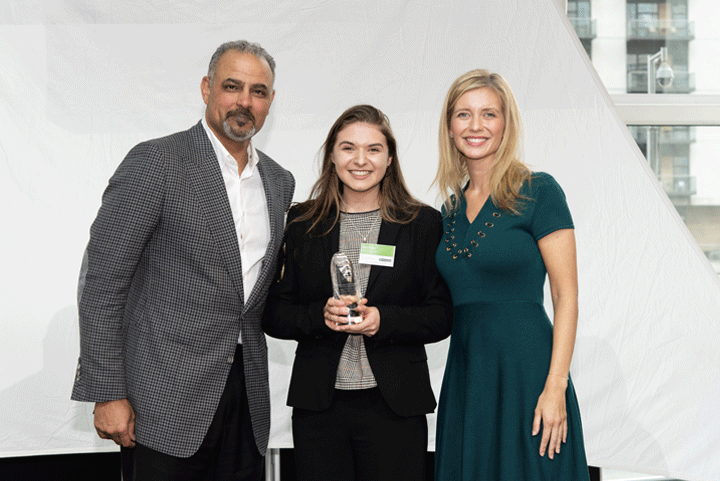 Bella studied ancient history at the University of Nottingham before continuing to a masters in management at the University of Bath. She is the former social secretary and president of the Classics Committee within the University of Nottingham. Bella also previously volunteered as an Army cadet and her leadership and teamwork was recognised when she received The Duke of Westminster Award in 2017 and Best Section Commander Award at a military competition two years in a row in 2015 and 2016. She is also a proactive member of her local community, being head of a unique school tradition called drill, and has spoken at many professional conferences, encouraging qualifications and military organisations for young individuals. Bella has since undertook a summer placement at Enterprise Rent-A-Car HQ, choosing to gain experience in the sales team. 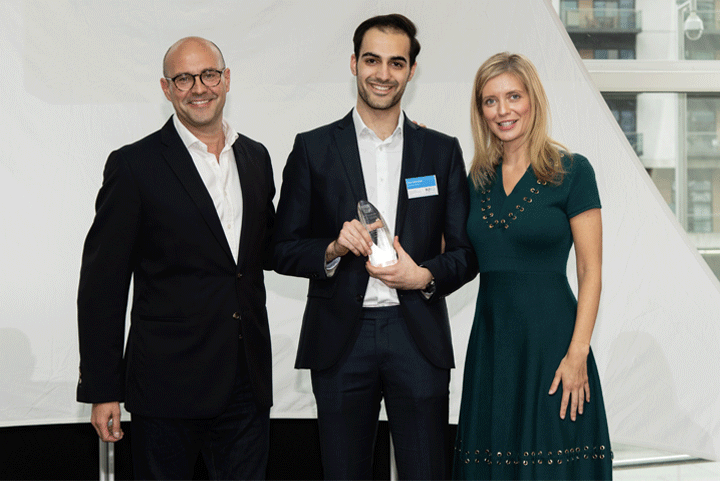 Sina studied economics and management at the University of Bristol. In his own time, he started his own business called Peppercorn, focusing on redistributing surplus food from businesses to local non-profits. Peppercorn has redistributed over 100kg of food to people in need instead of landfills. He has won over £10,000 in grant funding for his project and business and personal awards from O2, the University of Bristol and TSB to name a few. Sina has also mentored for student start-ups and enjoyed his role as the vice president of the University Entrepreneur Society. Sina has undertaken internships at PepsiCo while also being a freelance football journalist, appearing on podcasts and having articles published in magazines and online. 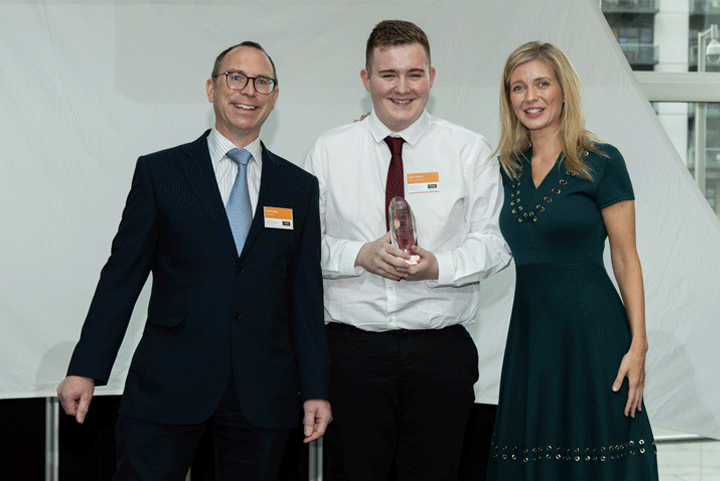 Luke is studying mechanical engineering at the University of Manchester. Having grown up in foster care, Luke is determined to break the mould and become the best he possibly can be. Luke is ambitious both academically and career wise, always striving for perfection and taking every opportunity he can. Examples include being elected the president of halls of residence by fellow peers, self-enrolling on an advance Python coding course, taking extracurricular studies in Chinese, completing SolidWorks CAD courses, and working on ambitious projects that are directly relevant to the engineering and construction industry. One of Luke’s core values is social mobility and he strives to make the most of a situation. Luke completed a summer placement with Laing O'Rourke, working on some of its most prestigious projects. 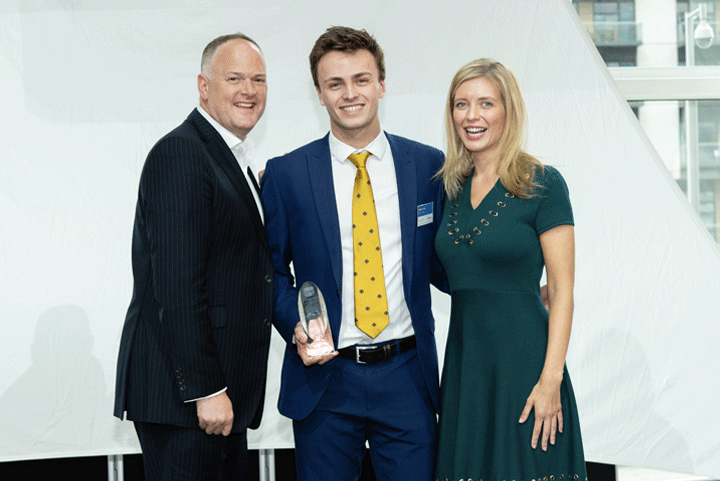 Will is studying mathematics at Durham University. Alongside his course, he enjoys getting involved with sport and is a keen fencer, having represented Wales at the Senior Fencing Commonwealth in November. He holds a Vice Chancellor’s Scholarship for sport at Durham, where he also plays a lot of squash. His experience includes an internship as a business analyst at a local stem cell research company, working in administration at a medical centre and tutoring local school children. His academic interests are not limited to maths, as he also enjoys and took A levels in Latin and Ancient Greek. After winning the award, Will was offered a ten-week placement with L'Oréal in London and even spent some time at its HQ in Paris! 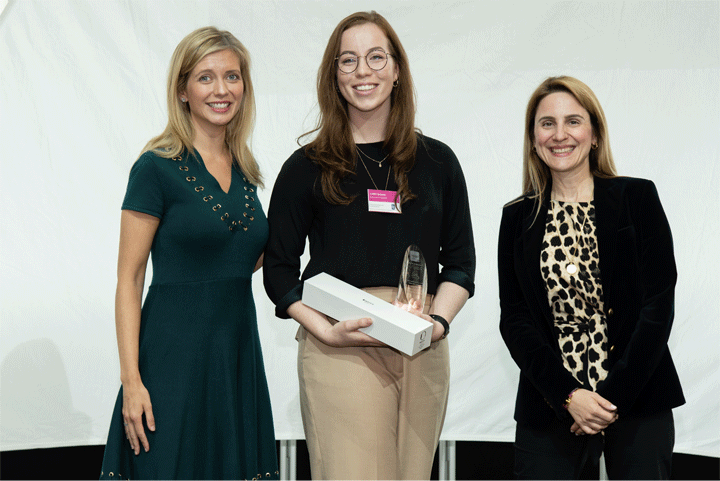 Jude studied mechanical engineering at Queen’s University Belfast and completed a placement at Stryker Belfast with the research and development project management team. She is passionate about promoting women in positions of leadership and in 2018 was selected as one of the Royal Academy of Engineering Leadership Scholars. In the summer of 2017, Jude studied at the Nanjing University of Aeronautics and Astronautics in China, and in 2018, she returned to showcase a group project at an exhibition in Tianjin. Outside of work and study, Jude has participated in business programmes coding classes and project management training while balancing a demanding university rowing training schedule. Since the awards, Jude secured a summer internship with Rolls-Royce. She was placed in lifecycle engineering and got the opportunity to work with teams both in Derby and in Singapore. 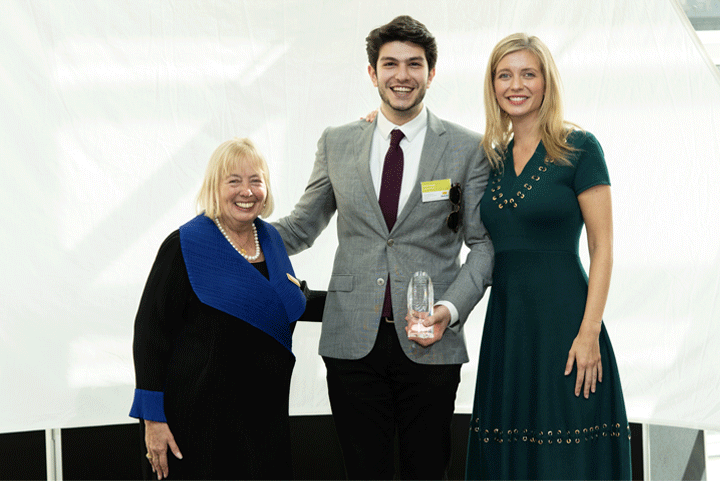 Born and raised in Jordan, Samir has always been involved in service work and volunteering since the early age of six. His passion and desire to make constructive change within his community stemmed from his family’s own background and journey in life, from starting as refugees. Ever since, Samir has done a range of service work, from volunteering in orphanages and old people’s homes, to starting his own initiative where he trained over 300 refugees and Jordanian locals on the basics of sports and athletics. His project, Children of Jordan, was initiated in 2014 and still thrives today. 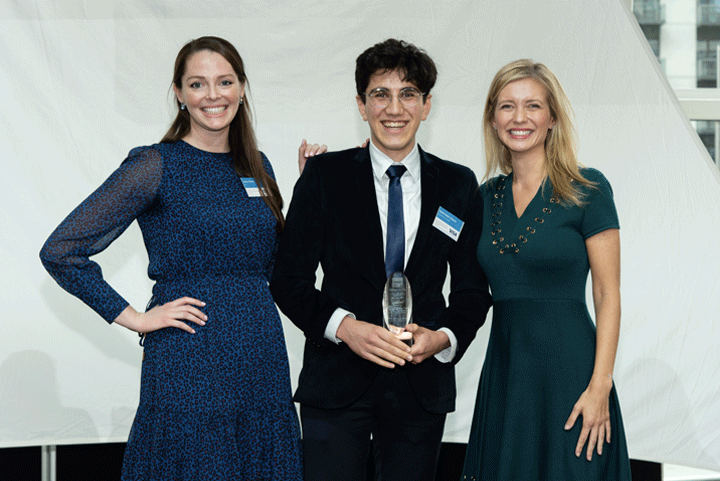 Mehdi studies computer science at Newcastle University. Being passionate about STEM, he has collaborated with the BBC to deliver computer science lessons in his community to inspire the next generation of coders. Mehdi continues this initiative by spearheading the outreach branch of the Computing and Technology Society, where he directs teams of mentors who teach coding lessons in local schools and empower students further. Mehdi has also interned at Shearman & Sterling LLP, where he developed VBA macros to automate attorney workflow processes. He also enjoys competing in debates and has organised multiple international debating competitions. After the awards, he spent three months as a software engineer intern at Visa. 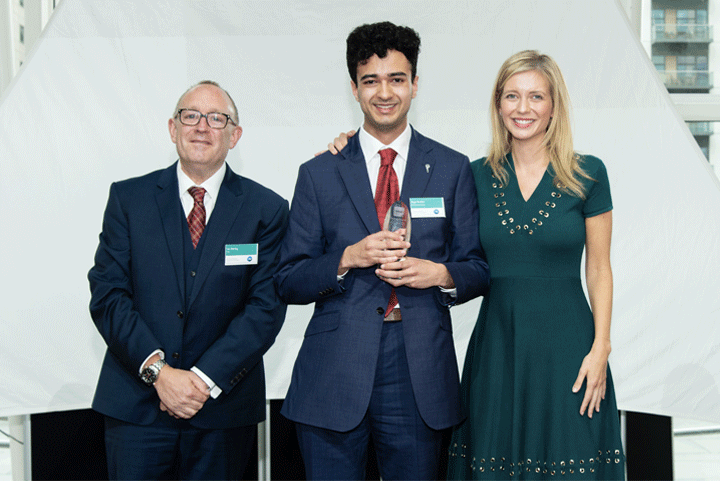 Arya studied philosophy, politics and economics (PPE) at Hertford College, Oxford. He was president-elect of the PPE Society, co-chair of the Labour Club, president of the Oxford Forum (a speaker and debate society) and a campus-wide elected delegate to the National Union of Students. Previously, he was editor-in-chief of the Oxford Student newspaper and co-founded an online media project, which recruited 50 team members worldwide and gained 30,000 Facebook followers within a month. He gained placements in fields ranging from consulting, investment and research and development to political research, social campaigning and counter-extremism education. In his spare time, his hobbies have included web development and pool lifeguarding. After winning the award, he completed a seven-week internship at P&G in commercial sales management.