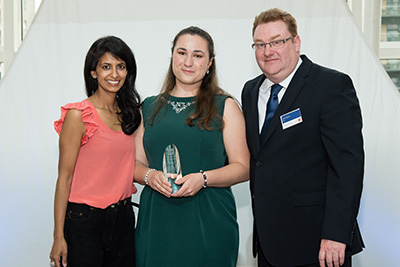 Ekaterina is an economics student at the University of Cambridge. She competes on the DanceSport team, is a member of the Bulgarian Society and does access work for her college and the university. During her gap year, Kati worked for Deloitte in the executive remuneration department and spent the summer travelling in Canada, where she was a camp counsellor. While at Deloitte, she helped with recruitment events and carried forward similar responsibilities through her role as a campus ambassador at Cambridge. She has also previously interned at Bank of America Merrill Lynch. She enjoys exploring new places and learning languages.

Head to Ekaterina's blog to find out about her experience of the Undergraduate of the Year Awards. 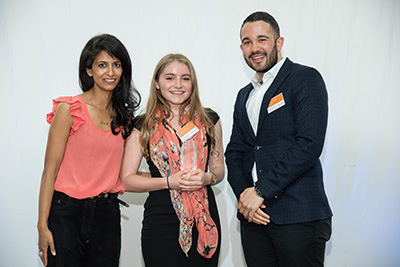 Hannah studied computer science at the University of Surrey and completed her placement year at The Walt Disney Company in London. Hannah loves combining creativity with technical projects – mainly mobile and web apps – and focusing on user interface and user experience design, having learned valuable skills at a mobile development start-up. Hannah regularly attended competitive hackathons while at university, allowing her to apply her problem-solving skills and innovative ideas to developing a winning final product. She won a prize with The Hut Group’s Game of Code for her app idea and design. She started her own web development and design company and spent summer 2017 as an innovation labs intern at Deutsche Bank. 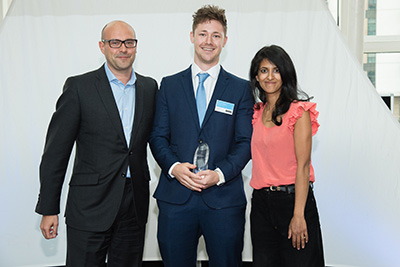 Alex studied economics and finance at Cardiff University, where he ran informative individual and group sessions for first-year students as a student mentor and completed the Cardiff Award alongside his degree, expanding his commercial awareness and business acumen. As senior student and sports ambassador for his school, Alex mastered public speaking and effectively liaised with staff and the community to improve their public image. Combatting brain damage sustained while playing semi-professional rugby, Alex has shown incredible resilience to flourish academically and socially – and played lead guitar in an alternative rock band. He spent summer 2017 as a private client intern at First Names Group.

Head to Alex's blog to find out about his experience of the Undergraduate of the Year Awards. 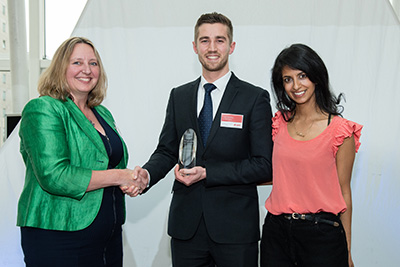 Craig studied mechanical engineering at Heriot-Watt University. In 2016, he secured scholarship awards from The Saltire Foundation and The Incorporation of Hammermen of Edinburgh. These enabled him to travel to Silicon Valley to intern for a health-tech start-up company developing life-saving medical devices. Craig is passionate about giving back: he volunteered his time as president of Heriot-Watt Boxing Club and as a mechanical engineering ambassador. He also took on ambassador roles for the Sports Union and The Saltire Foundation. Craig raised over £1,000 for two charities by swimming from Alcatraz Island to San Francisco. 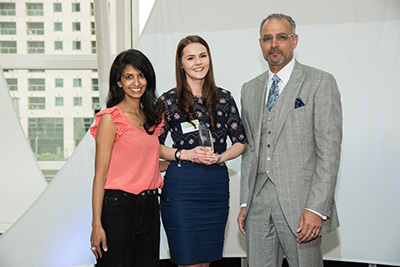 Kirsten studied international business with modern languages at the University of Strathclyde, specialising in management with French. Kirsten is the youngest member of the board of directors at Glasgow Women’s Library – the only accredited museum of women’s history in the UK. She was a Saltire scholar, represented her university as a languages ambassador in high schools throughout Scotland and the social media manager for the Strathclyde Women in Business Society. Kirsten worked with local young people in Glasgow and assisted with the planning of an annual international youth festival on the island of Iona.

Head to Kirsten's blog to find out about her experience of the Undergraduate of the Year Awards. 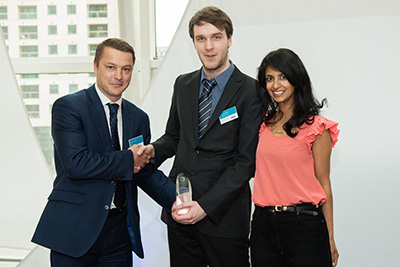 Although Kieran studied artificial intelligence and robotics at Aberystwyth University, he spent his third year working for Abaco Systems, creating suites of automated tests for a manufacturing automation project. Kieran is passionate about computing for the younger generation. During his year in industry, he regularly helped out at code clubs at local schools to teach younger children the fundamentals of coding and show them how to improve their CV and presentation skills. Kieran is an avid comic book reader and he founded the Aberystwyth Comics and Cartoons Society, which provides weekly showings of nostalgic cartoons and the latest animated movies.

Head to Kieran's blog to find out about his experience of the Undergraduate of the Year Awards. 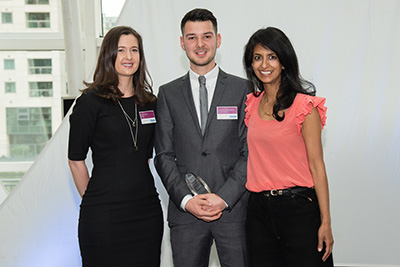 Connor studied mathematics at the University of Reading. In his spare time he helped run, and plays for, an 11-a-side football team. He also enjoys long-distance running. In 2014, Connor spent two weeks in Indonesia completing conservation work in both the tropical rainforest and coral reefs, where he qualified as a PADI scuba diver. He fundraised £3,000 for Operation Wallacea in the process by organising various bake sales and quiz nights. Connor has progressed all the way through the scouting movement, going from a Beaver to a Young Leader. He spent summer 2017 as a finance intern at Gazprom. 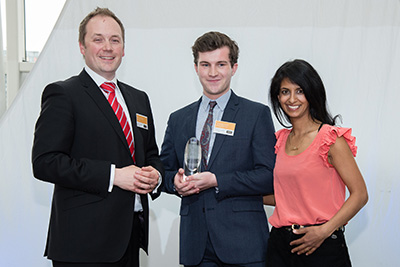 As the former president of Nottingham Trent University’s Civil Engineering Society, Matthew is always seeking new ways to innovate in the industry and with the people who shape it. Through his work as an ICE student brand ambassador, Matthew was involved in the organisation of Sir John Armitt’s ICE guest lecture at the university, addressing the future of the industry and the challenges posed by Brexit. Following other successful summer placements, Matthew spent his summer 2017 as a civil engineering intern at Laing O'Rourke and is looking forward to facing new, exciting challenges within the industry.

Head to Matthew's blog to find out about his experience of the Undergraduate of the Year Awards.

Angus studied ancient history at the University of Birmingham. Elected secretary general of the Model United Nations (MUN) Society, he ran IBUMUN 2017, one of the largest MUN conferences in the UK, and has received awards at several conferences, including ‘Best Delegate’. Alongside his studies, Angus enjoyed being a radio presenter and political writer with Just Debate UK. Angus also sat on the faculty committees as the representative for approximately 1,000 students within the School of History and Cultures. He has been an academic mentor, as well as a brand ambassador for Virgin Media, Circle and New European. He worked at L'Oréal as a digital marketing intern in summer 2017.

Head to Angus' blog to find out about his experience of the Undergraduate of the Year Awards. 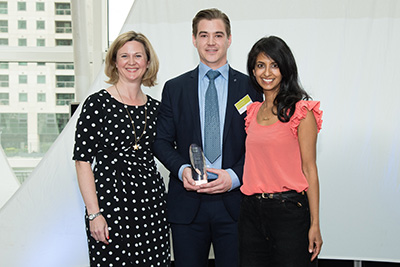 Winner: Oliver Haddon | University of the West of England | Business

Oliver studied business at the University of the West of England, while also working for a software company based in Bristol as a business development intern. During university he regularly trained and played national league rugby for Dings Crusaders. He has also developed a passion for travel, which has meant he has travelled to Africa, America, Europe and Asia – and completed work experience as an accountant in India. Oliver has used these experiences to co-found a marketing company, which utilises virtual reality technology and 360-degree cameras, after winning the UWE apprentice challenge, alongside two other students. 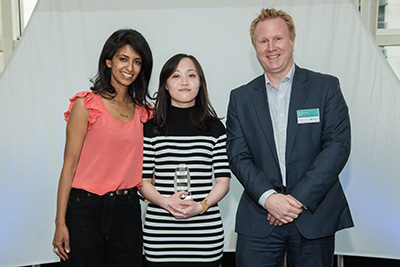 Tai studied economics at Newcastle University and regularly participated in voluntary projects. As the vice president of AIESEC Newcastle, Tai led the committee in helping aspiring youths create a positive impact through personal development and volunteering experiences. She was also a dedicated team member of Enactus Newcastle, a project that aims to teach entrepreneurship to women from minority backgrounds. Tai participated in a local competitive football team for four years and also enjoys reading and travelling. She is intrigued by development economics and volunteered in Sri Lanka during summer 2017 to help small-scale entrepreneurs grow.

Head to Tai's blog to find out about her experience of the Undergraduate of the Year Awards. 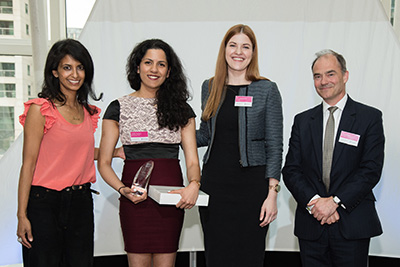 Trisha studied physics at Imperial College London and was the organising chair of the UK Space Design Competition 2017, which engages around 800 students each year in designing space settlements based on briefs written by NASA engineers. She took part herself two years previously and was one of twelve students selected to represent the UK at the International Space Settlement Design Competition at the Kennedy Space Centre. Trisha was also a member of the executive committee for UKSEDS, a national organisation that aims to increase student involvement in the space industry. She delivered skills training to volunteers through Imperial College Union, for which she is accredited by the Institute for Leadership and Management. She spent her summer 2017 as an operations management intern at Rolls-Royce.

Head to Trisha's blog to find out about her experience of the Undergraduate of the Year Awards.