targetjobs is thrilled to announce Sue Perkins as the host of the targetjobs Undergraduate of the Year Awards 2022.

Sue Perkins studied English at New Hall (now Murray Edwards College) at the University of Cambridge, graduating in 1991. While at Cambridge, she was a member of the Footlights where she met Mel Giedroyc. She was Footlights president during the academic year 1990–91.

Sue is an accomplished presenter, writer, actor, director, and comedian. Together with her presenting partner, Mel Giedroyc, Sue first entertained the nation in 1997 on the popular Light Lunch, which ran for five series before transferring to an evening slot titled Late Lunch. With their fresh and unstuffy style, they jumped, yelled, and gurned their way through hours of television, marking the start of a double act that has lasted over 25 years, including the seven series of The Great British Bake Off (2010 -2016).

Sue hosted four series of Insert Name Here on BBC2 (2016 – 19) and The Greatest Snowman for Channel 4. She has appeared on many comedy panel shows, including Comedy Game Night, QI, Have I Got News for You and The Last Leg. On the radio, she can be heard on BBC Radio 4’s staple comedies The News Quiz, as well as hosting four series of Dilemma. As a big fan of Game of Thrones, Sue has presented the final four series of its companion show Thronecast (2015 – 2019) for Sky.

Sue’s love of the natural world brought her to narrate the Audible podcast series Earpedia: Animals/Plants as well as hosting BBC Radio 4’s Nature Table. In 2017 her witty and warm presenting style won her the prestigious gig of hosting the BAFTA Television Awards, which she returned to host in 2018.

Sue’s series of twenty podcasts: An Hour or So With… reached #1 on the iTunes podcast chart soon after its release, and these intimate and informal audio specials include conversations with Mary Berry, Stewart Lee, Emma Thompson and John Lloyd.

Sue hosts BBC Radio 4’s long-running iconic comedy panel show Just a Minute. She received an incredible reception after she followed in the footsteps of the late Nicholas Parsons. The Telegraph gave Sue a five-star review, stating that “the comedy game is in safe hands”.

Over the course of her career, Sue has proven to be a highly talented writer, with writing credits including the beloved BBC comedy series Absolutely Fabulous and an episode of the influential Banana in 2014 (E4/More 4). Sue also has written and directed Urban Myth: When Joan Kissed Barbra for Sky about Joan Rivers and Barbra Streisand. The short film featured Jessica Barden and Katherine Ryan and received rave reviews, including ★★★★ from The Times.

In 2015, her memoir Spectacles garnered great reviews and reached the coveted number one spot in The Sunday Times paperback non-fiction chart. In 2017 she toured with her stand-up show based on the book, performing to sell-out audiences across the UK. Her second memoir East of Croydon was released in 2018, detailing her travels across South-East Asia alongside tales of her growing up in South London. 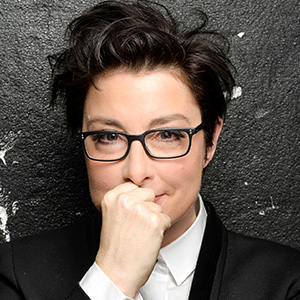