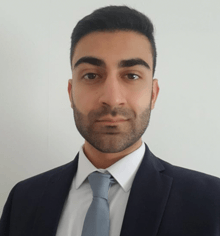 Award:
Construction and Engineering
Winner/finalist:
Finalist
Year of event:
2019
Degree:
Mechanical Engineering
University:
University of Surrey
I first found out about the Undergraduate of the Year Awards while looking online for STEM opportunities that I could take part in.

At first, after a quick read, I thought that there was no use in me applying as I wouldn’t get very far in the process, but then I read more about the Awards, and about the categories and some of the previous winners and finalists, and felt motivated to enter. I decided that I should at least send in an application, in the hope that I would progress to the next stage.

After submitting my initial application, I was given the task of writing two short essays to demonstrate my interest and knowledge in the industry. The questions were set by the sponsor for the Construction & Engineering Award, Laing O’Rourke. My first essay was about an innovation that could be used in the construction industry to support sustainability and the second was about my favourite project in the construction industry. For my first essay I wrote about the use of virtual reality technology in the planning and prototyping of construction projects as I had recently read an article about the practical uses of virtual reality. For my second I chose to write about the Burj Khalifa building, currently the tallest building in the world. I have visited Dubai a few times in the past and have always been fascinated by the Burj Khalifa, which is one of the most astounding buildings in the central Dubai skyline.

Shortly after submitting my essay questions and completing the set of online tests, I received an email telling me that I was on the shortlist for the Awards! It was an unbelievable feeling to have made it this far in the process, when at the start I had thought I had no chance of making it very far. The next stage was going to the Laing O’Rourke Headquarters in Dartford for an assessment day with the other shortlisted candidates.

When the day came to travel to Dartford I was nervous for the whole train journey, so much so that I almost missed my connecting train. I was particularly nervous about having to give a presentation about why I felt I deserved to be chosen to win the award. When I arrived I discovered that all the other candidates were nervous about the presentation as well, but we were relieved to find that we had to present to a single assessor instead of a room full of people. We also were given a group task to consider a current construction project and think about the best way of proceeding. This was difficult as we had to show our skills individually but also work as a team to come up with a successful solution to the task. The most memorable part of my day was when the fire alarm went off in the middle of our group task and we all had to evacuate the building. This did break the flow of our group discussion but it also gave us more time to think and calm ourselves down while waiting outside in the cold!

I was working with my group project team at university when I received the email from Laing O’Rourke telling me that I had made it into the final 10! I was absolutely ecstatic as I had never dreamed that I would make it to the final stage. I immediately booked my train tickets to Canary Wharf. I was excited to find out that none other than Rachel Riley would be hosting the award ceremony.
On the day of the finals I was so excited for the whole journey there, from the moment I stepped onto the train to arriving at East Wintergarden in Canary Wharf and being given my name badge. I quickly found the other finalists and some of the assessors from Laing O’Rourke. Being in a room surrounded by all the other talented finalists and figureheads from world-leading companies was very motivational and I felt honoured to be a part of such a remarkable group of people.

The event was a really great opportunity to meet and network with industry leaders and other talented students from across the country. The highlight of the event was listening to Rachel Riley give a very enthusiastic speech about inspiring the next generation. I was even lucky enough to get a picture with her after the Awards. Although I didn’t win the award, the winner was more than worthy and all the finalists were sincerely happy for him. After the event, the finalists and assessors went to a nearby restaurant to congratulate the winner and talk about the whole experience. It was really nice to talk to everyone in a more social, informal atmosphere. All of the candidates were outstanding and amazingly talented; I wish them every success in their careers and hope that our paths will cross again in the future.
I am very glad that I applied for the Awards and am so pleased that I reached the final stage. Although I did not win, I have been recognised by engineering companies for taking part and it has really helped me gain confidence in my abilities. Being a finalist has made me more employable and has definitely been a talking point with lecturers, my colleagues and future employers.

This experience has taught me lots of different skills that I will use in my professional career. I would definitely recommend and encourage students to apply to the Undergraduate of the Year Awards because, like me, you might surprise yourself with how well you can do. There is so much you can gain from taking part in the Awards and you could be the winner of your category. However, you have to apply if you want to have a chance of winning. I wish you all the best of luck!
I would like to say thank you to TARGETjobs, Laing O’Rourke and everybody involved for running the Awards. It was a fantastic experience that I will never forget!