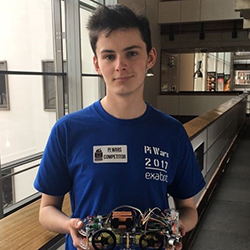 Award:
Computer Science, IT and Physics
Winner/finalist:
Finalist
Year of event:
2019
Degree:
Computer Science
University:
Newcastle University
I first heard about the Undergraduate of the Year Awards when a friend told me he'd stumbled across it online while looking for summer internships. At first, I was hesitant to apply. I'd worked hard this past year and had achieved some good things, but thought there was likely some extremely impressive competition that I’d be unable to compete with.

Eventually, after some convincing, I decided to take my chances with applying, just so I could understand how amazing you must be to get into one of these things.

The application process was quite simple at first. I wrote an essay on what I’d done and why I thought I deserved a place in the competition. I wrote about the team I managed when teaching employability skills to refugees from Lebanon and Syria. I described my experiences with competitions and my surprise at coming first place in Cambridge’s Pi Wars robotics event. I cut out anything I thought was unimportant or dull, leaving only the best of what I’d achieved.

After submitting my essay, I was contacted a few weeks later. I was excited because I got through the first round, but also nervous as I now had something to lose. I was given an online personality test which was comfortable, then a difficult online coding challenge. I thought I was going to fail, before finding a solution at the last minute and getting a great score.

I thought I’d given it my best shot on the online tests, so was satisfied with how I’d done. I never would have imagined getting through to the third and final round.

Once they told me I was in the semi-finals, I was overjoyed but starting to feel the ever-increasing pressure of performing to the standard of some of the best undergrads in the country. I went to the assessment centre extremely cautious, having never done one before. As it turned out, my fears were mostly unfounded as everyone at Visa was friendly and welcoming, making me feel a lot better.

As the assessment got going, we were given a group presentation to deliver to everyone. I was far too safe in my contribution to the team, trying not to rock the boat as far as suggestions go. I think this was the main weakness of mine during the day. I’m neither talented nor inept with my public speaking skills, but my lack of practice led to a poor performance. It’s important that you can be at ease in stressful situations such as these, but that ability requires you to engage in those situations on a regular basis.

After the group presentation, there was a short break then a one-on-one interview with a member of Visa’s team. I was asked about all my extracurricular work and my main challenges, weaknesses, motivations, etc. This was a nice opportunity for me to talk about my projects with someone who was interested in them. I got to ask about life at Visa and why I should work there. For my first real interview, the stress was manageable, and my answers were better than expected.

For the last part of the day, I had a technical interview with one of Visa’s software engineers. I had heard this was a tough one, with a coding challenge given for you to solve in real time. Programming is my strongest skill, and I managed to do well despite the tough questions given to me. Overall, my performance far exceeded my aims for the first assessment centre I’d attended.

I may have done well in the semi-finals, but I was astounded when the email appeared in my inbox, telling me I was invited to the finals of the awards. I bought a suit, as this event was so strange for me. I’d never had to prepare for anything like this in my life.

A lot of the other finalists were in the same boat as me, trying to figure out how they got there. We had a nice time on the day, waiting for the winner to be announced. I took the opportunity to meet people who had astounding resumes, with projects far greater than mine. This gave me ideas on what I needed to achieve. I wanted to be the best but lacked the vision for how high to aim.

In the end, I didn’t become TARGETjobs’ Undergraduate of the Year, but I became a stronger person. I persevered and accomplished much more than I could possibly have imagined. I’m becoming more confident, growing in ambition, because I can see what others have done and realise I can too.

In closing, I’d like to let everyone thinking of applying next year to understand what this contest gives you. Even if you don’t think you’ll win, you’ll still learn some valuable lessons along the way. If you’re like me and want to develop yourself as much as you can, this competition is for you.