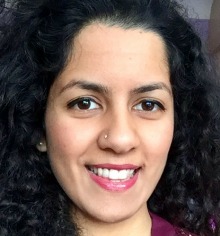 Award:
Female
Winner/finalist:
Winner
Year of event:
2017
Degree:
Physics
University:
Imperial College London
Trisha decided to apply on a whim, little did she know she would be crowned the Female Undergraduate of the Year!

I decided to apply for the Undergraduate of the Year Awards on a whim in November last year, never knowing how far I’d get. I read the criteria to apply and felt I had a bit of experience – not loads, but enough – to send an application. I thought to myself, 'why not?' and went for it! After submitting it there was a bit of a wait since the deadline was over two months away, and I spent that time speculating as to who the other candidates would be and whether my application would ever be good enough on a national level.

Early the next February I received an email from TARGETjobs saying I had been longlisted for the award… soon followed by an email from Rolls-Royce inviting me to an assessment centre since I had made it to the top 20! I was amazed – when I applied I had always seen the interview as a far-fetched dream and now I had been chosen to attend! I only had three days to book my trains and request a few days off from my tutor and before I knew it I was on my way to Derby. Unfortunately, ‘Storm Doris’ chose that exact day to strike northern England, which meant a journey that should have taken two hours took me just over 10 and it meant that I missed the networking part of the assessment centre. The journey from London to Derby was extremely stressful, involving five train and coach changes, an overpriced emergency taxi, and a lot of frantic calls from my parents to make sure I was alright. On the positive side, this just added to the excitement and made me realise just how determined I was to succeed at the assessment centre. I reached my hotel at seven in the evening and got straight to work on a presentation that they had asked us to prepare for the next day about diversity in the engineering industry.

Meeting the 19 other semi-finalists the next day was very eye-opening; everyone had had such successful lives and I couldn’t see how the interviewers would pick a winner! I certainly didn’t think it would be me. By the afternoon all the interviews were over and I was on my way back to London full of uncertainty. However, I received a phone call four days later – I had been chosen as one of the ten finalists, and had been offered a summer internship. I couldn’t believe it – I would be attending the awards ceremony at Canary Wharf and I had finally secured an internship!

The awards ceremony was two months later at the very glamorous East Wintergarden in Canary Wharf. I met lots of the other finalists from the other categories as well as the interviewers and CEO of Rolls-Royce. It was so inspirational to talk to such driven and experienced people. After the networking we had lunch and then the winners were announced. It was as if the unthinkable had happened – I won! I received my award in a state of awe, posing for pictures with my new iPad and glass trophy without it sinking in that I had actually won. I felt so privileged to have been awarded Female Undergraduate of the Year – something that I felt the other ten finalists deserved much more than me.

This summer I will be working in the purchasing department of Rolls-Royce, with a couple of weeks abroad at my line manager’s office in Poland. I am still in shock at the fact that I have the chance to work for a world-famous company such as Rolls-Royce, let alone go abroad as part of the internship to learn about their international clients. I am extremely excited to start in just over a month’s time and I am certain that I will learn extremely valuable new skills in the ten weeks I spend there. I am excited to meet my team and take the first baby-steps of my career, adapting to a new environment and becoming a more confident individual. I will never be able to thank TARGETjobs and Rolls-Royce enough for this absolutely amazing opportunity.