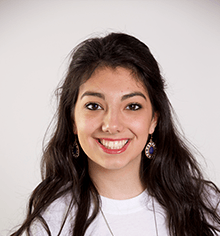 I studied international business with business law at Glasgow Caledonian University. With a love for travel, I completed an Erasmus exchange in France and taught English for one year in Senegal with Project Trust. Several of my experiences helped develop a passion for sustainability within business, so I saw the Future Business Leader of the Year award as the obvious choice for me.

I was already familiar with the Undergraduate of the Year Awards before I had even considered applying, as I had used TARGETjobs throughout my time at university to look for placements and graduate employment. Out of them all, the Future Business Leader of the Year was easily the category where I felt myself best placed. I was studying international business and had previously worked in finance, procurement and CSR. Yet, despite this, I had still spent some time deliberating whether I should apply, especially looking at previous winners and their own backgrounds. However, I was drawn to the FMCG focus of the application, as this was the sector I had wanted to enter, and Mars being the sponsor company was naturally extremely attractive. So, perhaps partly due to dissertation procrastination, I decided to submit an application.

Everyone says it, but I really was genuinely surprised each time I passed a stage of the application. The initial psychometric testing was similar to those I was completing when applying for graduate jobs, so I was really encouraged when I passed this and it motivated me to continue with the application. Having said that, the next stage involved a telephone interview and was probably the stage I felt I had messed up the most! I had spent so much time preparing generic interview questions that I was completely thrown by the more informal, person-centred approach of the interview. I was probed on my CV and specific experiences as opposed to the generic competency-based scenarios that I was so used to, which made it harder for me to try and work out how well or poorly I’d done. Looking back though, the interview was a good indication of what was to come: an assessment centre designed to really understand candidates further than simply what can be taken from a CV. This was probably my favourite thing about the whole process; I felt like I had really got to understand Mars (and also the other candidates in my category) and that Mars had taken the time to understand us. When I think back to how I was undecided about applying, I’ve learned that embracing having differences as opposed to being intimidated by them really paid off.

Winning the award was the most perfect way to finish off final year and gave me so much more confidence for graduate life. Admittedly, throughout the process, it struck me how well everyone got on, particularly in comparison to other assessments I had been involved with. One of my highlights from the Awards was how much fun we all had together – the real source of competitiveness surrounded which category had had the best table (Future Business Leader 100% won thanks to all the chocolate goodies courtesy of Mars). Even after the ceremony, so many of us have stayed in touch, whether this is via our social media group or by supporting each other’s business ventures. I truly feel like I have met people who I can rely on later in my professional life and, if that’s what the next generation of undergraduates looks like, then I look forward to what lies ahead in my career!

Sarahjane spent three months in Kenya with the International Citizen Service and is now working for Procter and Gamble as an account manager.