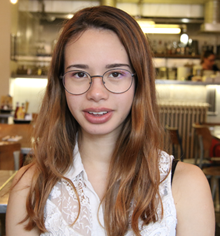 Award:
Female
Winner/finalist:
Finalist
Year of event:
2018
Degree:
Mechanical engineering
University:
Imperial College London
I believe today that I am an entirely changed person through the Undergraduate of the Year Awards. I can look back over the last year, and see leaps and bounds in personal and professional development, but most importantly in the wealth of incredible people that I have had the privilege of meeting.

I first heard about the awards because I happened to know the winner of the 2017 Female Undergraduate of the Year, Trisha, through an engineering outreach challenge that we both worked with. I saw that the award was sponsored by Rolls-Royce and, as someone who was already dreaming of one of their very competitive internships, I had nothing to lose in applying. I never believed I had any real chance of succeeding, so I simply thought of the application and online tests as good practice for future applications. Soon afterwards, an email arrived that shocked me to the core: I had been called to an assessment centre as one of the 20 finalists.

The assessment centre in Derby made everything suddenly very real and it was at that point that I started taking things even more seriously. The day itself was surprisingly fun and it began the long line of incredible people I would go on to meet throughout the Undergraduate of the Year Awards experience. Be it my fellow finalists, recent graduates there to give us advice, or the senior members of Rolls Royce that had been called in to interview us, everybody had an impressive story to tell. The fact that such senior employees were present for the assessment day and keen to talk to us showed how important the award actually was to the company. People truly recognised the disadvantages of having such a male-dominated work force, so they made us finalists feel important as part of this initiative they were supporting. It was a competition that clearly benefited the diversity of thought at their disposal.

It was a long day of interviews, group exercises and tours; we were challenged but, having prepared beforehand, I don't think it was too terrifying an experience. Mainly, the day formed the foundations of some incredible friendships with the truly outstanding women who had made it to that stage. What followed were the longest two days of my life, and then a phone call that truly changed it.

I had made it to the final ten and was invited to an awards ceremony in London. This was a beautiful celebration of a huge number of awe-inspiring young people. It opened my eyes to how much potential we have as undergraduates and motivated me to do so much more with myself.

As part of getting to the finals, I was also offered a summer internship with Rolls-Royce control systems in Birmingham. It was a ten-week crash course in the civil aerospace industry, where I learned about engineering design, modelling, manufacture and test, as well as a host of soft skills that come from being in the office environment. I was grateful for how accepting people were; it allowed me to ask questions every step of the way and fundamentally understand what was going on in these high-level discussions. There was a huge value placed in developing interns and graduates and so I gained so much knowledge, experience and confidence in that short space of time. Again, the most important thing I found was a community of inspiringly brilliant people, at every level of the organisation.

Incredibly, all of this happened simply because I was looking for some application practice.