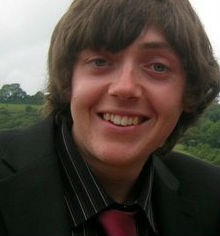 I discovered the opportunity to apply for the Engineering Undergraduate of the Year Award during early January 2014, after an email had been sent out from my university’s career team. At the time I thought, 'It’s unlikely that I would get very far through that process', and therefore initially was not going to apply. However, before the end of the month, we were visited by the winner of the award in 2013, Jake Tudge, who had been studying the same course as me at the same university, but was one year my senior. He visited and delivered a presentation, outlining the process of applying for the award, followed by some of the experiences and exciting work that he’s been involved in since winning and working for E.ON.

This was just the inspiration that I needed; meeting someone who had been in nearly exactly the same position as me and then who actually went all the way and won the award! Shortly after meeting Jake, I went on ahead and applied for the award.

The initial stage involved completing multiple online forms and questionnaires, followed by several online tests not too dissimilar to that used by other companies when applying to apprenticeships, internships etc, which consisted mostly of workplace scenarios and seeing how you, as a team member, might deal with them. After this, I was required to answer some industry-specific questions and it was here that having a good knowledge of E.ON and the sector that they work in (energy) was key. I spent roughly a week preparing my answers and arranged meetings with members from my university’s career team to ensure that the answers that I provided were suitable for the questions being asked. Once we were both happy, I then sent off my application with the hope that maybe I might at least get to the assessment centre.

Several weeks later, I was delighted to receive an email inviting me up to Ratcliffe-on-Soar power station, near Nottingham, to an assessment centre. This was extremely exciting for me as I had never visited this area before and, being based in Bristol decided to venture up to Nottingham the night before the assessment day.

The day itself consisted of three main activities:
• a role play activity:
• a case study exercise:
• self-presentation and interview:

After the assessment centre, I felt that I had performed really well and enjoyed the experience. It was great to meet the team from E.ON alongside my fellow candidates. It was a brilliant day and just having the experience of attending an assessment centre was really beneficial. Making the final would be a bonus.

About a month later, I was contacted by phone from E.ON stating that I had made the top ten finalists! I was amazed and could not wait to attend the final in Canary Wharf!

On the day itself, I travelled to London with a fellow UWE student who had also made the final: Imelda McGrath. This was great for my university as we had two finalists and the winner from the year before attending in Canary Wharf. To attend the final was an amazing experience on its own and I’m so glad that I made the initial effort to apply in the first place!

Applying to this award has provided me with so much additional experience and, since then, I have never been nervous about attending assessment centres or interviews! Despite not winning, the award has provided me with much self-belief and I now know that I do have the ability to be a good professional and work my way up in the business world. I loved every minute and meeting many new people who are on similar career paths to me was a real highlight!

After the final, I was privileged to be offered a placement at E.ON, proving that not just the winner benefits from making the final. Shortly before this I was also offered another internship more specific to my course and, as of the time of writing, I am currently midway through completing a 12-month internship at Airbus in Bristol. I would never have believed that I could have been in a position of having two placement offers when I applied to the award in January!

If you’re thinking of applying, go for it! You most certainly have nothing to lose! I didn’t think that I would ever have made it as far as I did, but with a bit of inspiration from others and some self-belief, you’re never too far from achieving big things! I just hope that I can inspire you to apply!

All the best and good luck!