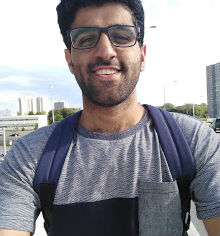 Initially, I dismissed the emails that advertised the Undergraduate of the Year Awards on the basis that such opportunities only apply to extraordinary people. A week before the deadline I received a third email, which finally encouraged me to investigate further. This time the criteria seemed more applicable and the possibility of me receiving such an award began to germinate. To address a few concerns regarding my chances, I set out to uncover the traits of previous winners through the 2015 blog entries. Many people held the belief that becoming Undergraduate of the Year was unachievable for them; however, the process still promised much to be attained.

As part of the application I needed to answer three non-trivial questions designed by the sponsor, Expedia. I struggled to conjure up anything relevant, leading me to conclude I wasn’t destined for this journey.

48 hours before the deadline, I received a call from the Undergraduate of the Year team urging me to complete my application. I appreciated the thoughtfulness behind this gesture and the humanity behind the team. So I readied myself to battle the questions. If not for myself, then for the people who place their faith in people like myself.

When it came to answering the questions, it proved beneficial to brainstorm potential thoughts or experiences of mine that were relevant to the questions. After this, I took three psychometric tests – what helped me tremendously with these were the multiple examples and tips available on the internet - definitely take a look at them!

While imprisoned by illness, I received an email inviting me to the assessment centre and detailing the plan for the day. The assessment day was held at Expedia’s London office and involved icebreakers and a group exercise, where we designed an Airbnb app highlighting nearby special offers. In the afternoon I networked with the assessors and current employees. Being placed in groups with strangers to design and present an app in just 45 minutes made the group exercise a worthy challenge. In short, the day was very pleasant despite its competitive nature. Moreover, speaking to the current employees at Expedia informed me of the work completed at their offices.

The final ceremony was the easiest part of the process. I sat down with all the finalists and the Expedia staff members that I had gotten to know, had a delicious three-course meal and listened to Fiona Bruce’s amusing stories. Although I didn’t win, I increased the prospects of me working for Expedia, featured on my university’s website and had an honorary mention during my summer 2016 university’s graduation ceremony.

If you are eligible, then grasp this opportunity and apply. Seriously, throughout this process, nothing changed; I was still ordinary Mazhar. I just happened to do that little extra by applying.