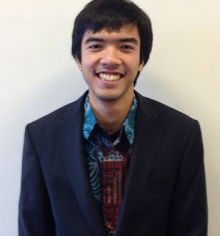 Award:
Low Carbon
Winner/finalist:
Finalist
Year of event:
2015
Degree:
Chemical engineering
University:
University of Manchester
Our Low Carbon Undergraduate of the Year runner-up, Luthfilaudri, tells us about his experience of the Awards!

The first time I heard about theTARGETjobs Undergraduate of the Year Awards was when I was in my second year. I received an email from my university about the Low Carbon Undergraduate of the Year Award. At the time, I did not bother applying for the award and filling out a lengthy application form. I was thinking that the chance for me to win the award was really small since there was only one winner for each category. I thought that it would be better to apply for other summer internships that have a bigger chance of getting accepted.

In my final year, I received the same email from my university inviting me to apply for the Low Carbon Undergraduate of the Year Award. But that time was a bit different as the university told us that we had won the award in 2014. That encouraged me to apply for the award, despite the stress I was bearing from doing my final-year project. I filled out the application form and wrote the essays required for submission. After that, I clicked the submission button and I immediately received an email that led me to a series of online tests. And hey, who would have known that a couple of weeks later I was emailed by EDF Energy that a phone interview would be conducted to shortlist several candidates to be invited to an assessment centre.

The day of the telephone interview with an EDF employee eventually came. I was quite nervous at that time, although it was not my first time conducting a phone interview. As soon as the conversation started, I felt a sense of relief because the interviewer was really friendly. This phone interview was the toughest interview I had ever done as the interviewer expected concise answers from a set of tricky questions. After the interview ended, all I could do was pray and hope that I would get to the next round: the assessment centre. Surprisingly, I received an email from TARGETjobs saying that I managed to be in the top ten finalists for the low carbon award. EDF decided not to do an assessment centre. They used the application form and the interview as the basis of their assessment.

So, briefly speaking, I was invited to Canary Wharf in London for the grand final. The event was a really great opportunity to network with many talented students from across the UK as well as many employees from highly reputable companies. Not to mention, the food they served was heavenly tasty (that was my first time eating a fancy three-course meal). Time did fly and the moment of the winners announcement came. I already had a feeling that my best friend at university, Rahul, would win the award. I knew him as a well rounded person, who not only excelled academically but also in a social aspect since he was once the president of the chemical engineering society at university. And my guess was right: Rahul managed to get the Low Carbon Undergraduate of the Year Award! I was really happy for him.

Although I did not win, I did not go home empty handed. I took with me a spirit to be a much better individual. I also boosted my confidence level that everything could actually be achieved, even if it seems far away from my reach. This has been proven by myself being able to get a postgraduate course and secure a prestigious government scholarship! So my message to all of you who wish to apply for this award is just apply because you never know what you will get in the end. Do not see a failure as a failure; instead, see it as an opportunity to learn and rebuild yourself to come back stronger than ever.