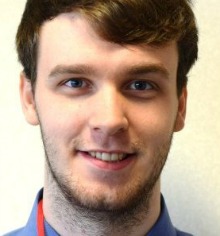 Well, I can honestly say that I never planned to apply for the Undergraduate of the Year Awards let alone become the Computer Science, IT and Physics Undergraduate of the Year. I had told myself I was never going to win because there were so many thousands of people applying that were probably much better and more equipped than myself and the odds of winning were likely to be very low. In the end, I decided to apply purely based on the fact that I had nothing to lose by applying, and so I applied on the off chance that I might get through. As part of the application process I had to answer two questions from the sponsor of the award, FDM, and then I had to take three different competency tests. There was a situational test, a logical reasoning test and a numerical test. This is usually the part of any application process that I fall down on and so I honestly wasn’t too confident about any progression.
After I submitted my application, there was a little wait as I had applied in October and the deadline wasn’t until January. At this point I had almost forgotten that I had applied altogether.

In early February I was delighted to find out that I had made it through to the second stage, which was a telephone interview. The interviewer asked lots of competency-based questions as well as questions surrounding my motivation for applying. I didn’t think that I had done very well as the interview seemed to be very quick; however, in the next few days it was confirmed that I had been invited to attend an assessment centre in the FDM London office. I would be lying if I said I wasn’t a little nervous at this point: it was my first proper assessment centre and it wasn’t just any assessment centre. I was going to be competing with 19 other finalists from the best universities in the country. I also rarely ventured into the capital and so the stress of the commute and the fast-paced environment that London offered was a very new experience for me.

I arrived at the London office and was really impressed with the scale and openness of the office; it was unlike anything I had ever seen really. You always see that sort of thing on TV but you never imagine yourself really being there. There was an initial presentation about the company, who they were and what the prize was for the winner. This was followed by games on the iPad, which were designed to test our information processing and decision-making ability. These tests then build up a profile of you based upon your answers and actions during the tests. After the tests, there were two interviews. The first was competency based and was then followed by a more technical interview about my application. We broke for lunch before resuming with a group activity in the afternoon. It was a very intensive but a thoroughly enjoyable day and an experience that I will never forget.

A few weeks later I was told that I had made it through to the awards ceremony and was a finalist for my category. I couldn’t believe it! The awards ceremony was going to be in Canary Wharf with all of the finalists and representatives of each company sponsoring the awards. It was pretty incredibly to be given the opportunity to network with so many inspirational and senior company representatives as well as with like-minded finalists. We were treated to a delicious meal and Konnie Huq, the famous Blue Peter presenter, addressed the audience. The awards started soon after and I was the first category winner. I was flabbergasted, hence my expression of shock in all of the photos! I don’t think it really hit that I had won until I got home that night with the trophy in hand. I was so very lucky and privileged to have been awarded the Computer Science, IT and Physics Undergraduate of the Year Award and stand among the best undergraduates from across the company as well as pose for a photo. I’m forever grateful to FDM for giving me the opportunity to work in a wonderful company and TARGETjobs for organising a fantastic event.

The prize was a six-week internship in FDM’s London office overlooking the Thames. I am currently working there and have been focusing on developing an app workshop for Teen Tech Award winners SafeCase, which has been a really rewarding experience. It is such a welcoming and progressive company to work for and I am humbled that I am able to work among such driven people.