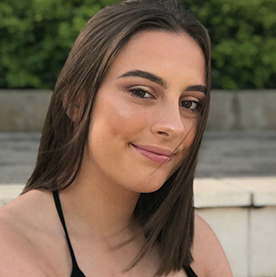 Award:
Management
Winner/finalist:
Finalist
Year of event:
2021
Degree:
Business Management and the Human Resource
University:
University of Leeds
I was made aware of the Undergraduate of the Year competition by my older brother, who is also a student at the University of Leeds. He encouraged me to apply, despite my own doubts, and expressed that anything would be possible if I set my mind to it. Being out of education for a while, due to the Covid-19 pandemic, I certainly did not feel prepared to be in a competition that included not just first years, but also second and third years on a four-year course. I felt they would have a lot more experience than me, but I chose to push myself out of my comfort zone and apply – one of the best decisions I could have ever made.

The first step of the application process was to give a short-length answer to a question Enterprise Rent-A-Car had set, which was to write about a time when I had demonstrated management and leadership skills. I was able to express this through my part-time work in the hospitality industry. It did not have to be related to anything I had done academically, or anything focused on my degree, and this put my mind at great ease.

Next, I had to complete three psychometric tests: an occupational personality questionnaire, a situational judgement test and an inductive reasoning test. This was my very first insight into tests, which I knew would become a big part of my application processes for future graduate jobs, spring weeks and summer placements. Despite at first thinking that I would be at a disadvantage for never having practised these sorts of tests before, I think this allowed me not to overthink the process, as I am aware that can sometimes happen with psychometric testing. TARGETjobs provided a set of practice questions before the real testing, which also helped to calm my nerves.

When I found out I had been successful in the tests and had made it to the top 60 for the Management award, I was over the moon. I never imagined I would make it this far. The next step was a video interview with one of the recruiters from Enterprise. In preparation, I looked into the company again and made sure to prepare some questions to ask at the end of my interview. The Enterprise website is filled with so much information that was not only useful for my interview but also great to learn about the company! By gaining this information, the interview went smoothly: I was able to answer all the questions I was asked, and with confidence in my answers too! Although having a video interview can seem daunting, the team at Enterprise were so lovely and made me feel at ease throughout the process.

To hear I was through to the next stage, the virtual assessment centre, was another shock to me I couldn’t believe it, but it also filled me with a newfound confidence. The assessment centre comprised of a group task, a role play and an interview with a recruiter from Enterprise. To say I was terrified was an understatement! Nerves, however, prove you’re human and it is completely okay to feel this way. The assessment centre was not only a great opportunity for me professionally, but also personally too. I had the opportunity to network with so many highly intelligent, like-minded individuals who I still keep in contact with now. All of the candidates at the assessment centre were great people with great talents.

Due to the assessment centre being filled with such great candidates, I had set my mind on the fact that I was not going to make it to the top 10, and that I should be proud of myself regardless of the result. To hear I had made it to the finals was the biggest and greatest surprise I could have received. It came as such a shock, but it also made me realise that my older brother was right all along.

Due to Covid-19, the finals could not take place in person, and so they were held virtually, with Rachel Riley as the host. Before the finals, I was sent a hamper of food by Enterprise – it was amazing! It included everything from quiche to cheese and cured meats, not to mention a small bottle of prosecco! It was definitely a lovely touch from Enterprise and was brilliant to eat while watching the final. Before the announcement of the winners, I attended a networking event with the other nine candidates for my award and the recruiters from Enterprise. Rachel Riley even popped into my breakout room for a quick hello! It was the best possible event considering the circumstances, and that is down to TARGETjobs and Enterprise, so thank you.

Despite not winning the award, this is my greatest achievement so far. From contemplating whether to enter due to my own self-doubt, to placing in the top 10 out of over 450 applicants from all across the country, it is something I will always remind myself of when pushing myself out of my comfort zone again. The lessons I have learned and the networks I have gained from this whole process have been second to none.

My advice for anyone who is considering whether to apply for the awards is to definitely go for it. You have nothing to lose and so much to gain. Like my brother told me, anything is possible when you really set your mind to it.