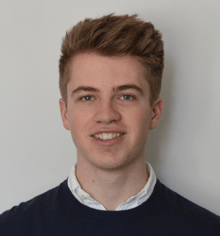 Award:
Future Chief Financial Officer (CFO)
Winner/finalist:
Finalist
Year of event:
2018
Degree:
Economics
University:
University of Leeds
Upon receiving an email advertising the TARGETjobs Undergraduate of the Year competition, I applied without a great deal of consideration, thinking about how little I had to lose. To have gone on to make the final, as the only first-year student in my category, is an honour I will hold throughout my career.

I still remember that specific email from TARGETjobs: ’ACCA is giving one lucky winner the chance to visit Dubai.’ It immediately sold itself to me, and I thought ‘this doesn’t sound too bad.’ After filling out the relatively short application form, I worked my way through the application process. This consisted of motivational questions about being a chief financial officer, aptitude tests and a video submission, which I found fun to put together. By applying my very basic knowledge of adding text to a video, I managed to adhere to the advice given by TARGETjobs – to make submissions as interesting as possible.

After that, I put the competition to one side as I thought that I would have no chance in succeeding. This was until I received an email from ACCA inviting me to an assessment centre at their London office, at which point I was completely taken aback. This was only my second-ever assessment centre, so I was a bag of nerves leading up to it. As it turns out, the whole day provided a really relaxed atmosphere and I met some really interesting people, not to mention the other candidates themselves! Activities on the day included a round table discussion about business ethics and giving a presentation on the field of accountancy. My advice here would be: don’t be deterred or anxious if you don’t know anything about what you’ve been asked to discuss. With a bit of research and the ability to bounce ideas off others on the day itself, you will be just fine. I certainly had no idea about the topic leading up to the assessment centre. The whole day was a great experience and I met some great friends with whom I’m still in contact today.

Following the assessment centre, I was convinced it was the end of the line. I was pleased with my performance, but after meeting my ‘competition’ (and discovering that I was only first-year student to have made it that far) I thought I had no chance of making the final 10. I remember receiving the email whilst with my parents and being in complete shock – I had actually managed to make the top 10 Undergraduates of the Year. I was ecstatic because it made all the prior effort worthwhile. Yet, my Dad was more excited about me meeting host Rachel Riley than the competition itself…

The final was a truly incredible event. Located at East Wintergarden in Canary Wharf, round tables were arranged so that we were sat with the other finalists as well as professionals. I was lucky enough to sit next to Clare Bennison, head of ACCA UK; the other half of the CFO candidates were on a table with ACCA CEO Helen Brand. If this doesn’t sell the competition to you, I’m not sure what will. To have had the opportunity to chat with such influential professionals in an informal setting is certainly not one to be passed up. The wealth of knowledge that they have makes conversation so easy and informative – at one point I was telling the head of ACCA UK how best to appeal to university students, which, if you had asked me a year ago, is not something I would have expected to be doing. On the whole, the finalists were all fantastic people, but the win by Charlie Francis was incredibly deserved, even if I did produce a small internal shriek when the first name of the winner was announced. The event then concluded with an after-party hosted by L’Oréal, which presented a great opportunity to chat with other finalists outside of my category, complete with complementary drinks and a free photo booth – it was certainly worth rearranging my train home for.

To sum up, I can’t think of a reason why you wouldn’t apply to this competition. To a certain extent, I am proof of why ‘I didn’t think I’d make it very far’ is a poor excuse for not applying. If you’re sat there with such thoughts, just take the plunge – you really don’t know how it will end up. Plus, with expenses covered, you really do have nothing to lose. So why not go for it?