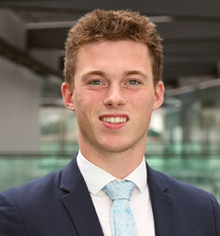 Award:
Future Chief Financial Officer (CFO)
Winner/finalist:
Winner
Year of event:
2018
Degree:
Accounting and finance
University:
University of Bath
My Undergraduate of the Year Awards experience started off with a simple application form – I thought, why not go for it? You have nothing to lose. I had certainly heard of ACCA and the Undergraduate of the Year Awards before, so I knew the award was backed by massively credible companies and was definitely worthwhile going for!

The initial application involved writing a short answer to a question concerning our ideas on the future of a Chief Financial Officer’s job – this certainly took some thinking and research, but I found it was an interesting topic. That was it! My application was sent off with plenty of time to spare, and they quickly came back with an invitation to complete some online tests. Having applied to internships in the past, I was fairly used to these; however they certainly had their challenging elements! The next communication was a congratulations on making it to the next stage, explaining that my details had been sent over to ACCA and that I’d be hearing from them shortly. When they got in contact, I was told to think creatively and create a two-minute video on the topic of ethics. My final submission came in the form of a news broadcast – my housemates found it fairly entertaining so I decided it was good enough to send to ACCA!

Receiving the email saying I had been selected for the final 20 was a real high point for me. I had no idea how well my video had compared to any of the others that had been submitted, and we were later told that they had received around 70 videos in total! The assessment day itself was in the form of a roundtable discussion with 10 of my peers – some of the points brought up during this were really eye-opening and made me think in a way I hadn’t before! It was at this point I fully comprehended the standard of the competition I was up against – they were all amazing! We then had to present to the assessors our view on how best to attract students to the profession of accountancy – again many interesting points came out. The day ended with a late lunch and the chance to network with the others and speak to the assessors in a more informal setting which was nice.

I left the assessment centre knowing I had performed as well as I could and hoping for the best, but with no solid expectations of making it to the final event a month later. A week later the email came in – I had made it! I certainly counted this as a success, and knew that making it to the top 10 was an achievement in itself. ACCA got in touch with us before the event explaining that we were to come to their office earlier in the morning to meet a few more people and participate in another discussion for a study they were running on the future of accountancy education. They stressed to us that this wasn’t assessed and that the winner had already been chosen, so it was great to be able to interact with the other finalists again knowing it had no bearing on the final result. Again, the discussion consisted of some top quality points, and we all contributed our respective views on the matter during the conversation with the ACCA members and representatives in the room.

The morning event helped to ease our nerves and meant that when we arrived at Canary Wharf for the final we were all in high spirits already. Walking into the room, we were met with prosecco and a string quartet – all very classy! Having been shown to our tables, we were introduced to the guests that ACCA as a sponsor had invited to the dinner; it was great to be able to talk to them about how they had got to where they were, and the food was fantastic! After hearing from Rachel Riley (yes, Countdown’s Rachel Riley!) about her views on STEM and the continued push to get more women involved in the sector, it was time for the awards. With an explanation of what each sponsor did and the thinking behind each award, there was plenty to take in and plenty to learn about the other awards and winners before it came to our award – Future CFO.

When my name was first read out, I was in disbelief. It hadn’t even crossed my mind that I could be in with a chance of winning, so walking up to the stage was certainly a surreal experience. I think my facial expression was summed up when the first thing Rachel asked as I walked up to the stage was whether I was okay! The next few minutes were a real blur, hearing my skills and achievements being read out by a star I had watched on TV for many years and receiving my award from ACCA Global CEO, Helen Brand. Next up was an after-party hosted by L’Oréal, which was a great chance to talk to the other winners and relax after the busy day we’d had.

I am massively excited about my trip in the summer to visit ACCA’s office in Dubai, the business capital of the Middle East. I’m not quite sure yet what to expect, however I have been told I will be meeting with a huge number of influential people and certainly talking to last year’s winner Ekaterina, I have no doubt that it will be an incredibly special week! I am also looking forward to my continued involvement with ACCA throughout the year, and being on placement in London from July means that opportunities will be just around the corner!