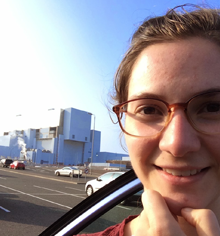 Award:
Low Carbon
Winner/finalist:
Winner
Year of event:
2014
Degree:
Chemical engineering masters
University:
University of Manchester
We speak to the winner of the 2014 Low Carbon Undergraduate of the Year Award about her experience since the final!

In January 2014 I had just got back from my semester abroad, studying at the National University of Singapore, and was looking forward to starting my third-year design project. I was in the process of looking for a summer internship and noticed an email from my university advertising the competition. I think everyone’s first reaction when seeing that only one person receives the award is that the chances of winning are slim. However, the experience gained from applying is invaluable and anyone should give it a go as I definitely surprised myself by getting through each stage.

In order to apply I had to submit an application form with two short essays about how my studies contribute to a low carbon future. Take your time to write these and think about how you could make yours stand out.

The next step was to complete a range of online tests. This included numerical reasoning, logical reasoning and workplace role-play tests. These tests provide good training and practice as they are used by most companies in their application procedures.

I was thrilled a few weeks later when I got an email inviting me to an assessment centre in a lovely hotel in Cheltenham Spa. The event ran throughout the whole day, so we were very busy going from one group exercise to another and completing tests.

There were three group exercises. The assessors were mainly looking for soft skills here:

* The first was a problem-based group task in which we had to demonstrate leadership and innovation in the way we approached the problem. There was a lot of time pressure so it was essential to remain composed and not be scared to propose alternative solutions. I would recommend you take your time to read through all the documents provided as it is easy to skim read and miss some crucial information.

* The second task was to build a wind turbine. This gave us the opportunity to show leadership skills by delegating a job to each team member. Organisation and coordination was necessary in order assemble the wind turbine under a certain time.

* The third group exercise took the form of a debate where there was no right or wrong answer. The assessors were looking for how we interact in a group discussion and how we come up with original ideas. It is important to listen and let others speak as well as getting your own ideas across.

We also completed two tests: one numerical reasoning test and one logical reasoning test. We were all quite drained at the end of the day so were thrilled to be able to use the hotel’s gym and pool facilities. We were treated to a networking dinner where we had the opportunity to meet current EDF Energy employees on the graduate scheme who shared their experience of working for the company.

A couple of weeks later, I couldn’t believe it when I was told that I had been selected as one of the ten finalists. I had made it through yet another hurdle. I was invited to the ceremony in Canary Wharf where we enjoyed a champagne reception and a delicious three-course meal. We also had the chance to meet industry representatives who shared their career paths. The event was hosted by no other than the broadcasting legend Sir Trevor McDonald who gave us an inspiring speech. The atmosphere suddenly changed as everyone was excited in anticipation of the announcement of the winners. I was over the moon when my name came up on the screen and Sir Trevor MacDonald called me to the stage. I walked over, shook his hand and received the award. I was very proud to have made it to the end and very excited at the prospect of starting my summer internship. I spent seven weeks in EDF Energy’s Barnwood office working on various projects. I was delighted to see that some of the finalists also got a summer internship. I was given interesting tasks to complete and felt like I was making a real contribution to the teams I was working for. I even managed to take my projects further and do more than my initial target! My internship gave me an insight into the dynamics of a huge company and how different departments overlap, emphasising the importance of communication and collaboration between teams.

I also spent two weeks working on EDF Energy’s Torness nuclear power station in Scotland. It was amazing to see in real life what I had until then only studied on paper and to see the huge scale of the reactor and all its auxiliary apparatus. It was remarkable to see how all the plant areas were interconnected and highly dependent on each other. I went around the plant with various powerful instruments, taking measurements and inspecting equipment. I had a much more hands-on experience and even got to enter radioactive controlled areas after completing appropriate training. I was warmly welcomed by every team I worked with, which made my stay even more enjoyable. Working for EDF Energy over the summer was such an amazing experience and I am grateful to have been given this opportunity.

I am now looking forward to my other prizes, which include a lunch with a station director and a visit to a nuclear power station in France. My advice to all prospective candidates is to make the most of this opportunity. Even if you don’t win the competition, the whole application process and assessment centre provide an excellent experience. It is incredibly useful to go through this recruitment process as it is similar to that of most companies. My whole experience has been exceptionally beneficial; I worked on a range of interesting projects, met inspiring people and expanded my knowledge of the nuclear industry. I had a wonderful time and look forward to applying to EDF Energy’s graduate scheme.

We caught up with Celine after her visit to Bugey Nuclear Power Station in France.

A few weeks ago I had the pleasure of flying out to Lyon in France to visit one of EDF’s French nuclear power stations: “La central nucleaire de Bugey”. The difference in design between French and British nuclear power stations was clear from the moment I arrived in Lyon. From the top of “La Fourviere”, Lyon’s famous basilica, a huge cloud of water vapour can be seen rising from Bugey’s four cooling towers. Bugey has five reactors: one going through its final decommissioning phase and four currently active. These four active reactors have two different condenser cooling water systems, one is a semi-closed cycle where the water is cooled through huge cooling towers and the other is an open cycle where the cooling water is continuously pumped from the nearby river, the Rhône.

The visit started off with a presentation of the company and the nuclear reactor technology used by EDF. We were then able to walk around the visitor centre, which has many interactive information stands, various models and fuel cell replicas. After thorough safety checks, wearing extensive personal protective equipment and passing through many metal detectors and control gates, the group made it onto the nuclear power station site. Our guide walked us through the different areas of the power station and pointed out a huge decommissioned turbine – its blades had been eroded by steam over its years of operation and its biggest disc had a diameter of over five metres. Walking into the 30 degrees turbine hall was a pleasure given that it was mid-December. In order to exit the nuclear power station site we had to pass through another set of gates for radiation contamination detection, which were all clear.