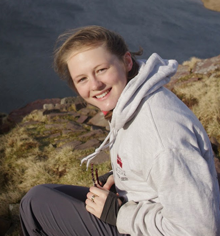 Award:
Construction and Engineering
Winner/finalist:
Winner
Year of event:
2014
Degree:
Civil engineering
University:
University of Bristol
The winner of the Construction, Engineering and Design Undergraduate of the Year Award 2014, talks us through her first few weeks on her placement at Laing O'Rourke

During my application for the Undergraduate of the Year Awards, I was fortunate enough to secure a placement working with Arup in its Hong Kong offices. I hadn’t assumed I would win the award, so I wasn’t going to turn down an opportunity to work abroad over the summer. Luckily when Laing O’Rouke announced me as their winner of the Construction, Engineering and Design Undergraduate of the Year Award, they were very accommodating and both companies allowed me to shorten both placements so I could fit them both in!

I have loved working in Hong Kong. It is a huge change of pace to working in the UK, with long working days and a lot of responsibility. I have been designing foundations for an LNG power station in the Philippines; this requires complex dynamic analysis and consideration of minimal differential settlement across the site. Aside from work, I have made some great friends both in Arup and Laing O’Rourke. Laing O’Rourke has a hiking team and we go out twice a week, which is a great way to get to know people and see Hong Kong. I have also managed to fit in lots of sightseeing on my weekends, but I still have plenty more to do.

It has not all been plain sailing. Visas have caused considerable strife and the eight-hour time difference makes it nearly impossible to contact people at home. Jet lag and the weather is a lot to get used to, and the inevitable Asian stomach bugs have caught me out once. But all this pales in the rush of the city.

Before beginning my placement with Laing O’Rourke I was very excited to be on site, but also a little apprehensive as I had been warned about working in over 40 degree heat. The experience ends in mid-September, so watch this space for an update on how it went.

We caught up with Brittany...

I spent my days 40 metres under the ground surrounded by a huge plant, breaking its way through stunning pink granite to make way for an extension to the North Point MTR station. I learned a great deal about working on site in a challenging environment, both physically and culturally.

Since the Awards I have graduated from the University of Bristol with a masters in civil engineering. Focused on the application of engineering in sustainable development, I then went on to work with Engineers Without Borders on a three-month placement looking at alternative sanitation solutions for a remote community on the northern coastal desert of Peru. In January 2016 I joined BuroHappold in their water team in Bath, and have enjoyed fantastic support from the company, enabling me to pursue my passion for sustainable development. In the summer of 2016 I joined World Merit in New York to develop an action plan for the United Nation's Sustainable Development Goals (SDGs), which I then presented in the UN. It is this passion for the SDGs that I presented at the New Civil Engineer Graduate Awards, winning Graduate of the Year 2016. The SDGs have been the backbone of my campaign to engage civil engineers in global sustainable development. I also took on one of the Institute of Civil Engineers (ICE) president’s apprentice roles, and have been learning a great deal under the wing of this year’s president Tim Broyd. I'm using this opportunity to support the ICE in its Shaping the World campaign and contribute to discussions around the role of engineers in sustainable development. I'm continuing to work for BuroHappold and pursue my love of working in remote communities, this time in Kenya looking at water access, but my primary focus is to engage engineers in contributing to a more sustainable future.