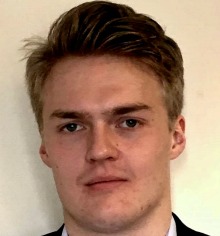 Award:
Engineering
Winner/finalist:
Winner
Year of event:
2016
Degree:
Master of engineering
University:
University of Oxford St Anne's College
Axel explains that you don't have to win an award to get something out of the competition

I won the Engineering Undergraduate of the Year Award in 2016, which granted me a summer internship with E.ON. As I always had the ambition to work in renewable energy, this job suited me perfectly, and I can honestly say that I never enjoyed work more than during that summer. I was able to see many parts of E.ON’s Citygen business and was given a nice mix of challenging tasks and freedom to work on my own projects. It was the perfect place to start understanding the energy industry and to get an insight into what I would like for my future career. This internship also allowed me to secure a graduate role with E.ON starting in September 2017. This was very important to me, as I was to spend the academic year of 2016-2017 at MIT in Boston, and would have struggled to apply for jobs in the UK.

It is important to remember that you do not need to win to get something out of the competition. I was, for example, not the only one from the Engineering Undergraduate of the Year category who was offered a summer internship with E.ON. It was also offered to the second and third place candidates, who worked with me in the Citygen office and who also were offered graduate roles. We are all very grateful to the competition for giving us this opportunity and for helping us kick-start our careers in a field that we are passionate about. We have also, to some extent, kept in touch with the other Undergraduate of the Year 2016 candidates, eg we have a Facebook page where people periodically post to receive help with surveys, start-ups and other career or university-related topics. The competition really is a great networking opportunity.

My advice to prospective applicants is that you have nothing to lose by entering the competition. It is no more effort than a standard job application, and it is centred on a topic that you presumably care about (like energy for me), which makes writing personal statements and doing interviews much easier. I would also advise you to keep it simple during the competition itself, for example, the interviewers care about your capacity and personality, not about how many pretty PowerPoint slides you have made for your presentation.

Axel is a performance engineer at E.ON.