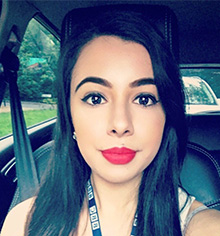 Award:
Impactful Social Action
Winner/finalist:
Finalist
Year of event:
2019
Degree:
English
University:
University of Derby
In the third year of my English degree, I mustered up the courage to apply for the TARGETjobs Undergraduate of the Year Award for Impactful Social Action. To me it seemed virtually impossible to be one of the top ten undergraduates for impactful social action in the UK, but ‘impossible’ does mean ‘I’m possible’ after all!

I’ve always been passionate about making positive changes within communities and have strived to help make the world a better place through a range of endeavours that I have participated in throughout my time at university. From being a BBC Radio Live guest speaker, working at Sky News HQ London, being part of a TEDx panel in collaboration with the United Nations and visiting the United Nation’s HQ in New York to presenting my research at the universities of Oxford/Warwick/Derby/Nottingham, working as a university study advisor, being a university blogger/vlogger and being the sub editor for Phantom Newspaper, I never said no to anything that came my way and the Undergraduate of the Year Awards was no exception. For me, the award was a great way to reflect upon the social action work that I had being doing for the past few years and it really did enable me to consider how to develop this and ensure that social action remains an integral part of my future career.

I came across the awards through an email from my university careers employment service and was intrigued to find out more about it. I searched through the website and was inspired by the stories shared by previous winners/finalists…little did I know that one day I would be writing a blog to feature on the website! I immediately created an account and began working through the application process. The bulk of the application involved answering a few questions. What I found to be most challenging was ensuring that my answers adhered to the word count as I soon found myself writing pages for each answer. However, this exercise enabled me to be more concise and really reflect upon the key points that I wanted to get across.

Soon after submitting my application, I received an email from TARGETjobs. I remember pausing before opening it as a wave of excitement and nerves swept over me, but it was all good news as I had made it to the next stage: the interview and assessment centre. Funnily enough, I actually don’t mind interviews (it’s probably because I’ve done so many with all the part-time jobs and extra-curricular endeavours that I’ve been involved in) but on the day there was honestly nothing to worry about as everyone at Teach First was very welcoming and friendly. After the interview, I had to deliver a presentation about an aspect of social action that I had been involved in. I focused mine on my work within the British Asian community, especially female empowerment, as I had worked a lot with young British Asian students to help them to develop their skills and inspire them to achieve their goals.

On the day of the interview, I particularly enjoyed meeting the fellow candidates and hearing all about their social action. It was absolutely amazing to see how much of an impact students can have on the world around them. As the interview took place at Teach First HQ in London, which was three hours away from where I live, it was a great experience to travel independently as I had not really visited London that often. Each of the steps leading up to the end of the application process helped to develop me further and it still would have been worth it if I hadn’t made it to the final as it was a great learning process.

Soon after the interview I found out that I had made it to the final. I was overjoyed to be recognised on a national level for the work that I had done to create a better society. This recognition fuelled my ambition to continue with social action and to also inspire others to get involved, even in small ways as it all makes a difference. On the day of the final I felt so much more confident travelling to London and it was lovely to meet my fellow finalists and Teach First staff again. It was inspiring to hear from each of the partner organisations for the different awards on how we as graduates have so much potential to not only create a successful career, but to also make a true difference to the lives of many.

Following the awards, I graduated with a first class degree in English from the University of Derby and have recently begun my masters in English literature at the University of Nottingham. I honestly feel that being an Undergraduate of the Year finalist enhanced my masters application as I was awarded a fully funded scholarship for my course too. I also competed an eight-week paid internship at the BBC in London and Birmingham during the summer before my masters and have now got a part-time job at the BBC as a radio freelance assistant producer.

If you’re reading this blog and are in two minds about whether you should go for it or not, my advice would be to drop the doubt and focus your whole mind on the outcome that you want. As Walt Disney once said. ‘If you can dream it, you can do it’…so go DO IT!