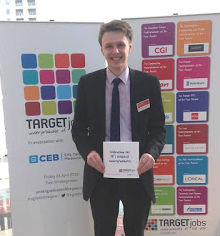 Being in the final year of my degree, I was constantly looking for opportunities to expand my personal development and boost my CV. So when I received an email from TARGETjobs about the UK Low Carbon Energy Undergraduate of the Year Award, it really captured my interest.

The process itself was testing to say the least, made even more difficult by the prospect of upcoming exams and coursework deadlines. However, after completing the various stages of the assessment, including four online tests designed by SHL and a competency-based interview with EDF Energy, I was happy to learn that I had made the final ten for my category.

The final ten were invited to the awards ceremony in Canary Wharf, London to hear who had won. This was a fantastic experience as I got to network with students, employers and professionals from across the country and hear of the fantastic things that they were doing. After an excellent three-course meal, the winners were announced. Although I didn’t win, I am extremely proud to have got so far and to have had the opportunity to represent Glasgow Caledonian University as their sole finalist. When I entered I had no idea how far I would get, so to be a runner-up in such a prestigious competition far surpassed my expectations.

After this, everything was a win-win. Not only had I gained experience by going through a challenging application process against some of the brightest undergraduates in the country, but I had something on my CV that intrigued many employers.

It is true that after the Undergraduate of the Year Awards I have been very busy, with numerous opportunities presenting themselves to me. Since mid-May I have been completing a United Nations environment programme internship with the Environmental Management Group and Sustainable United Nations in Geneva, Switzerland. One of my main responsibilities in this role is to help deliver the climate neutral strategy, which this year needs to be completed a few months earlier in December to present before COP21 in Paris. The experience I have gained from the Undergraduate of the Year process without a doubt helped me to get through a tricky interview and ultimately secure this position.

I have also recently been offered a role with SPACE Canada as their CDF coordinator in their upcoming space-based solar power project. Although I cannot reveal too many details about the project at this point in time, I can say that it concerns gathering solar power in space and beaming it back down to earth through microwave beams as a form of renewable energy. I have also been accepted to do a PhD in mechanical and aerospace engineering at the University of Strathclyde directly relating to my research in this. Again, I feel largely indebted to the Undergraduate of the Year process for giving me the confidence and skills necessary to achieve this.

I would strongly recommend applying for the Undergraduate of the Year Awards. Even now, I still feel a huge sense of accomplishment. When first applying, I didn’t think I stood much of a chance, but there I was in the middle of Canary Wharf and all because I took a couple of hours out of my day to apply for the award.

To anyone thinking of applying, what have you got to lose? In the worst case you end up with nothing less than you had before. And you might just surprise yourself!