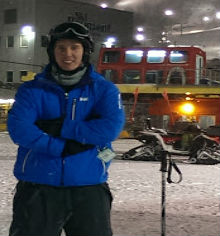 Award:
Male
Winner/finalist:
Finalist
Year of event:
2015
Degree:
Politics, philosophy and economics
University:
University of Lancaster
Read on to see what our runner-up Alexander has been up to since the Undergraduate of the Year Awards!

I felt that the Undergraduate of the Year contest truly kicked in during the assessment centre. It was thrilling and exposed me to an industry I’d never considered before. I’ll always fondly remember working on a business case for Armani fragrances as part of our individual tasks. Using creative thinking and applying things I learned at university felt so exhilarating. It sparked an interest, so when I found out that I’d been shortlisted as an Undergraduate of the Year finalist and invited to attend the final in London I felt proud.

The ceremony itself was an amazing experience and TARGETjobs couldn’t have organised a better event. It was great to be surrounded by young, ambitious and bright people – the vibe and energy was certainly contagious! While I didn’t win, I still saw reaching the final stage as an achievement and a treasured memory. I’m also glad I was able to ride on that feeling and the momentum far into the summer.

Fresh out of university, I welcomed the first guests to the refugee housing facility I’d been working on for a bit over a year and I co-founded a new initiative focused on fostering innovation on a Nordic level through large-scale incentive competitions – trying to create a public-private partnership unlike anything attempted before. With this aim I attended two separate week-long political festivals in both Denmark and Sweden with the goal of gaining support. I’m happy to say that I was invited to present a proposal to national representatives from the Nordic countries at a Nordic Council meeting in Oslo just a few weeks back and the dream is very much still alive! Even as I’m writing this blog post, I’ve just returned from the Association of Space Explorers’ annual congress, oddly enough due to another contest I entered – trying new things and following your dreams can truly bring you to unexpected places!

Apart from that, as an Undergraduate of the Year finalist, I was offered a placement within L’Oréal group – one that I gladly accepted. After the summer, I ended up within the commercial development team at The Body Shop. So far the job has been great. There are plenty of new things to learn (especially as I’m working with new makeup products – as a guy that’s not easy I’ll tell you!). Plus living in London and getting to explore the city has been a fantastic experience so far and I’ve only just gotten started!

I’d say take bold steps as you’ll never know where you’ll end up and who you’ll meet during your journey. For me, the experiences I got with Undergraduate of the Year opened up new opportunities and paths I could never have imagined before. I live and work in one of the most vibrant cities on the planet. Every day as I walk to work I think to myself, I live in a city that almost has as many people as my home country. It always baffles me: it’s simply amazing and I can’t thank TARGETjobs and Undergraduate of the Year enough for that feeling.