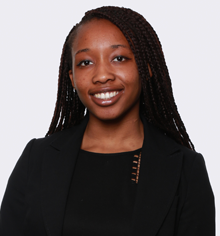 Award:
Female
Winner/finalist:
Winner
Year of event:
2018
Degree:
Materials science and engineering
University:
Imperial College London
The Undergraduate of the Year Awards have been a phenomenal opportunity which I wholeheartedly encourage you to apply for. The process is one which will teach you about your strengths, allow you to network at an amazing level, and introduce you to new friends.

I first heard of the undergraduate of the year competition during my first year at university, via an email sent to me from the Careers Service. I was less than two months into my degree, I looked at the award categories and their previous winners in awe. They were exceptional. I was inexperienced. Maybe one day, I could be that kind of undergraduate.

I applied to the Female Undergraduate of the Year category this year, as I felt that I could relate to the type of person it looked for: ‘commercially aware’, ‘driven, curious and courageous’ and ‘ready to be challenged’. These were attributes I had to learn and develop during my first year at university, and Rolls-Royce, the sponsor, was a company that I wanted to undertake an internship in – (they do some seriously cool Materials Science R&D!)

The first stage of the process features answering three questions (set by the sponsor). I found the third, which required deeply considering the commercial needs of Rolls-Royce, more challenging. It was a really satisfying challenge though, as the more I dwelt on it, the more interesting and exciting it became. The online tests were hard to gauge. Having completed them, I fully expected to receive a ‘Sorry, the competition was incredibly tough and you haven’t made it through’ email.

So, you can imagine my shock when I received a call from Suki, European Resourcing Manager, telling me that I’d received an invitation to the Rolls-Royce assessment centre, to take place one week later. I was ecstatic and terrified. I was told that I would be emailed details about a presentation I would need to deliver, in addition to having a one-to-one interview and group exercise.

Like for any student in second term, academic work was starting to build up, and I was so worried I wouldn’t produce a good presentation. Preparation, practice and refining made all the difference. I didn’t go to Rolls-Royce with a perfect presentation by any means; I went with the best I could do, and an attitude that this would be an excellent learning experience and a fun day in Derby, if nothing else.

I have never been to a more welcoming and encouraging assessment centre. Rolls-Royce booked hotel rooms for all the candidates, so we got to know each other a little bit over breakfast and in the taxi, before we arrived at the assessment centre and met our assessors. The day started off with a tea break and networking session with senior business leaders, who were genuinely interested in getting to know us! We were commended for being the final 19 from 663 candidates, and the atmosphere was more celebratory than competitive. When we weren’t in an assessment exercise, there was break out space where we could get to know the other candidates – a very cool bunch of people.

We also had a networking lunch with more business leaders and assessors, a tour of the Rolls-Royce Heritage Trail, and got to meet with graduates and ask them questions. As much as it was an assessment centre, it was a day of fun (even the group exercise), and it really showcased why Rolls-Royce was such a lovely place to be.

Then there was the nerve-wracking wait to hear about if we had made it from the assessment centre stage, to the final 10 who would attend the awards ceremony in Canary Wharf in April…

And what a ceremony it was! In the beautiful venue, we were treated to a warm reception with a 1:1 ratio of senior business staff to candidates. It was brilliant to meet and get to know other finalists from other award categories, and to speak to senior representatives at Rolls-Royce and other companies. Reunited with the candidates who I’d gotten to know over the assessment centre, I almost forgot it was a competition and was just enjoying a day with friends, good food, and engaging business representatives.

Rachael Riley (from Countdown!) was an awesome event host, and shared a really inspiring story about her foray into television and her continuing engagement in STEM. All of sudden, it was time for the winners to be announced and the nerves sunk deep in. When my name was called I was in shock for about 48 hours… I couldn’t believe that I’d been named Female Undergraduate of the Year for 2018!

It has been an immense privilege to take part in this process, and I’d strongly encourage you to apply for any of the awards, and to nominate your friends. As undergraduates, we can achieve exceptional things, and this reward provides excellent recognition for that.

I didn’t think I would make it past the first round, let alone win, but if I hadn’t applied, I would never have got to this stage. Believe in yourself and give it a go – you’ll make some great friends along the way.

Now, I’m looking forward to a summer at Rolls-Royce in Birmingham, where I’ll be living with another 4 of the final stage candidates. Just exams to go and then a remarkable summer.